John Allen originally trained as a Dental Technician then after two years in the army, worked as a coalman before training to become a Textile Designer at the age of 27. Since then, he has been a textile designer specialising in printed, woven and knitted fabrics for over 25 years, having worked in most areas of the textile craft and industry.

In 1977, John was instrumental in setting up the knitting department at the Royal College of Art in London where he was Organising Tutor until 1989 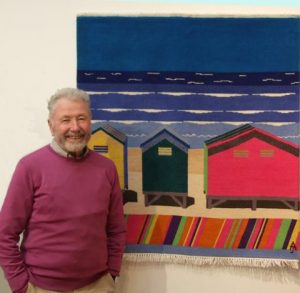 when he left to concentrate on his own work. He lectures and conducts workshops and master classes, but always continues to work as a Consultant Designer for companies as diverse as Kanebo in Japan and the Shetland Islands Traders Association. He was made a Fellow of the Royal College in 1985.

John has appeared on television and radio programmes about design and textiles, and was heavily involved in the development of the 12 week series of textile programmes for Anglia Television in 1993.

He has written 5 books and writes regularly for numerous magazines and journals. His first book broke all sales records at the time, for any craft book, selling over 110,000 copies.

He has lectured and conducted seminars in Japan, Holland and all the English speaking countries around the world. In 1993 he was appointed consultant to the Victoria and Albert Museum for specialist study days and was instrumental in setting up the ‘Design for Knitting’ and ‘Art of the Stitch’ days, these are now annual events.

In 1997 John organised and selected the contemporary work for the Barcelona Terrassa Textiles Museum exhibition, ‘One Thousand Years of Knitting’. He also wrote a short history of British knitting from 1940 to the present time for the catalogue.

With Missendon Abbey he set up the ‘Magic of Textiles’ event at Wycombe Abbey. This was unique in that it covered all the areas of textiles.

In 1989 along with Jon Crane he was responsible for planning the new design courses for the Nihon Vogue School in Japan.

John regularly writes and presents papers at conferences and in 1998 he presented a paper to the National Knitting Forum, in Dallas Texas and at the Parsons School of Fashion and Textiles in New York.

In 1999 he was invited to become president of the Weavers, Spinners and Dyers Association, which was instrumental in rejuvenating his interest in weaving again. In 2000 he curated the Anglo-Dutch ‘New Concepts in Knitting’ exhibition for the Dutch National Textile Museum in Tilburg, Holland.

In 2003 he had his first ever one-man exhibition starting at the London Knitting and Stitching Show, where 90% of the work was sold.